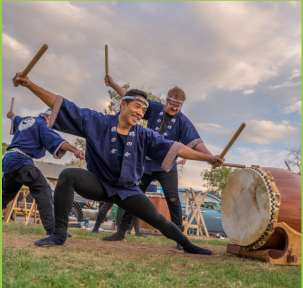 Tsurunokai brings the ancient art of Japanese Taiko drumming to the children of northern Nevada. Traditionally, Taiko drums have been used in warfare, martial arts, religious ceremonies, and festivals throughout Japan for over 1400 years. It is said that the beating of the Taiko drum echoes the beating of the heart and the rolling of thunder. The powerful sounds of Taiko drums will transport your students on a cultural adventure through Japanese history and customs. Tsurunokai performs traditional Japanese folk music as well as original compositions. Students will be invited to participate in drumming and dancing during the performance.